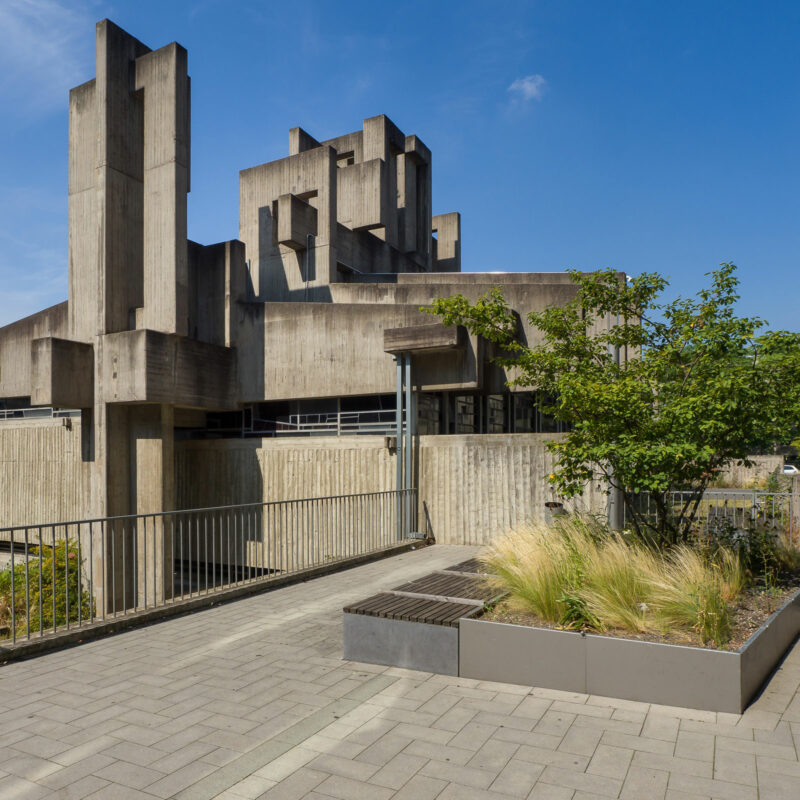 The church of the Catholic University Community in Berrenrather Straße, Cologne-Sülz, cannot be identified as such at first glance - no bell tower identifies it as a sacred building. It was built at the same time and in the same style as the surrounding buildings, concrete style of the late sixties, in which the new buildings of Cologne University were also erected nearby. The concrete, however, is used in a different way, as it were as a design material.

Even though the church is built in the same style, it becomes a sign of "otherness": "Construction as a sign of otherness in relation to the everyday processes of life is at the same time a sign of the purposelessness of pure play. This thought alarms the arts and makes them gain in rigour and unambiguity to the extreme, precisely in their translation into the sign. But "place of otherness" does not denote an arbitrary act of man, such as a building reserved from everyday life, intended only for prayers and spiritual concerts. Place of otherness means a place where the celebration of the mysteries, the mission of Jesus, is carried out, through the fulfilment of which only the church is constituted in all changes of circumstances." (Wilhelm Nyssen, Die Kirche der Hochschulgemeinde in Köln, Schriftenreihe des Zentrums patristitischer Spiritualität Koinonia ed. by W. Nyssen, Cologne 1983)

In 1964, the sculptor Josef Rikus was commissioned to build a church for the KHG, he did the design of the exterior and interior architecture, created sedilia, tabernacle stele, ambo and altar from heavy wooden blocks. The concept of the church is a tree that has its roots in the cave of the crypt, the lower church, the trunk - a wooden structure - is the shelter for the Blessed Sacrament, the branches unfold in a daring concrete construction in the interior and continue as the roof. Where the concrete pillars stretch up from the crypt into the upper room, at the breakthrough from the floor, transparent rough glass blocks suggest water and offer a view into the cave of origin. The connection from the lower to the upper room is provided by the four pillars, which act as a trunk supporting the heavy yet delicate concrete structure of the church.

The walls are pure concrete - pierced by red, blue and white and transparent glass windows that open up the view outside to the dormitory. Especially in the crypt, the place of art, these walls are of an almost oppressive bleakness - coldness and emptiness spread when the place is not being "used" liturgically. The altar of red sandstone and a square of four shaped concrete columns of the tree root emphasise the simplicity of the space. On the one hand, it wants to be filled and on the other, it keeps reaching out to the original emptiness. This room is more than an interior space enclosed by walls. It is an image of the original mystery of human existence, of the root of humanity, of the depth that is initially without support.

The floor in the crypt is made of the same material as the floor outside, red bricks. This means: the world outside is no different from the world inside, but it is nevertheless confronted with another dimension of world that does not deny the real one, but transcends it.

But it is not the space alone that creates this, it cannot be defined without its content and that is the liturgy. Our services in different formats take place here every Thursday at 18h.

Guided tours on demand and photo appointments and the like by appointment: